Terra Mystica: Merchants of the Sea 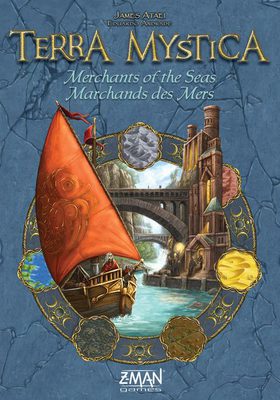 Sails appear on the horizon as the factions of Terra Mystica take to the rivers. Build shipyards, launch ships, and sail to distant lands to expand your territory and enjoy the benefits of commerce!

Merchants of the Seas expands on the hit terraforming gameplay of Terra Mystica. Develop your faction’s nautical strategy, stake a claim on distant lands, or focus on the benefits of trade. Plus, a double-sided board and over 30 tiles add countless new avenues to victory.

Enter a new era of trade and expansion in Terra Mystica with Merchants of the Seas. Each faction—including the Ice, Volcano, and Variable factions from the first expansion Fire & Ice—now has the option to build a Shipyard, as well as new Ships to embark on voyages toward valuable territory and lucrative trades.

While most factions pursue seafaring, the Fakirs and Dwarves prefer to stay on land. Instead of Shipyards and Ships, each can build a Market and send Merchants on profitable journeys. Like Ships, Merchants can be moved as an action and can help extend a faction’s reach to distant lands, as well as engage with other factions for commercial benefits.

The factions of Terra Mystica exist in a delicate balance, but their relative strengths differ with the distribution of terrain. Merchants of the Seas includes a double-sided game board with two new maps—Lakes and Fjords—so your faction can really take advantage of the waterways, but it also includes new Starting Victory points tables for all five Terra Mystica maps. Factions will start with different Victory points to account for their advantages or disadvantages on a given board, so your games can be balanced no matter the lay of the land.

Are you ready to trade, sail, and transform your way through Terra Mystica!