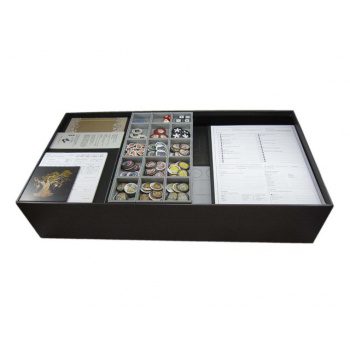 Please note - the insert is designed to fit the 1.5 version of the game with the box dimensions listed above. The insert works fine with the older 1.3 version, but the box is approximately 7 mm lower and in this case, the lid will not close fully flush. Insert designed for game with external box dimensions of 62.8 x 32.5 x 13.5 cm

This Campaign 2 insert is designed to be compatible with Kingdom Death Monster®, and the insert has space for a total of 1,300 standard-sized cards and 440 gear cards in total. The design provides both efficient storage and improved gameplay. All of the trays can be utilized during the game, and they greatly aid set-up and clear-away times. The insert works together with the FS-KDM+ insert to store, in addition to the main game, many of the game's expansions.

With the boards and top tray removed you can see underneath the next layer of token trays.

Underneath the token trays and board can be seen the card trays. These are split to have different storage capacities for the different kinds of cards. There is room for all cards to be sleeved.

The token trays have been made to be single large trays. This means the tokens can be removed quickly and placed on the game board so that you can easily access the card trays underneath. There are slots for all the token types and additional slots for tokens and tiles from expansions.

There are also trays for the larger terrain tiles and the settlement event cards. The cards can be sleeved.

Each of the card trays can store sleeved cards and is made to be removable from the box when needed. The access holes in the tray dividers are offset so that the black card dividers that come with the game can still be used and read while in the tray.

The gear card trays can either be used for gear cards or for standard sized cards. There is a cut on the side of the tray so the cards can be accessed. Again all cards can be sleeved with quality sleeves. When the trays are used for the larger cards, the total storage capacity for large cards is increased to 1,490 sleeved cards. The smaller gear card slot can be used then for storing the dividers no longer needed if you put your gear cards in a binder.

This product consists of a flat-pack of 12 Evacore sheets. The trays require assembly, which is quick and fun, using ordinary PVA glue. Detailed instructions are included in the package.