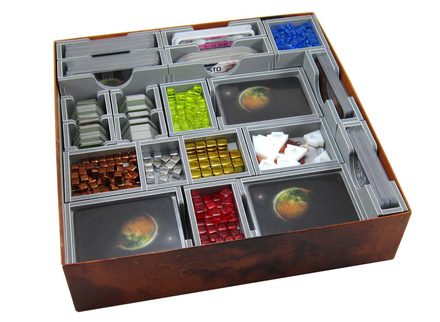 Note: Insert designed for games with external box dimensions of 29.5 x 29.5 x 7.1 cm. Also, note that this is the second version of the insert for Terraforming Mars.

This insert is designed to be compatible with Terraforming Mars® and includes space for the Hellas & Elysium®, Venus Next®, Prelude® and Colonies® expansions. The design provides both efficient storage and improved gameplay. Many of the trays can be utilized during the game, and they greatly aid set-up and clear-away times. The boards and player boards act as a lid on top of the trays.

There is space for all cards to be sleeved.

With the top layer removed there is the second layer of trays underneath. There is also a third square tray for the ocean tiles in the top right corner underneath the tray shown with the white cubes. Of the two large vertical trays, one is for project cards, and one is for the Prelude cards and the Colony tiles. The two narrow vertical trays are for the reference cards and the corporations. The three horizontal trays are for project cards. There is space for all cards to be sleeved with quality sleeves. All the trays can be used during the game to organize the components and make access by all players easy. The game boards and rule books go on top of the central trays and act as a lid keeping the game pieces in the trays. The lid closes flush, and the box can be stored vertically. When placing them inside, first go the two game boards, followed by the Venus and Colonies sideboards. Next, go to the player boards, and then the expansion rule books. Lastly, the game rules go on top, filling the box.

This product consists of a flat-pack of 6 Evacore sheets. The trays require assembly, which is quick and fun, using ordinary PVA glue. Detailed instructions are included in the package.