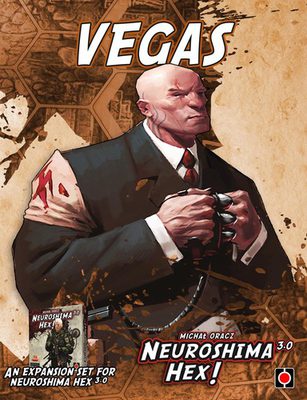 Vegas felt the effects of the war to a lesser extent than the majority of US cities and is one of a few surviving civilization centers, where you can live a higher life standard than in most parts of the ruined continent. Vegas has also become villains' Mecca, a place where they caught the scent of money making possibilities. Everyone knows today that in Vegas you can get everything you wish for, provided you can pay the right price. Vegas' strength does not lie in a strong army, or heavy weaponry, but in the wealth, machine programming and human manipulation skills.

Neuroshima Hex! Vegas is army of people who grew up in gambling. Its special feature is the ability to control the enemy of man and machine by means of special units - agitators. They can bribe any adjacent enemy unit to make it attack another unit. If your units attack Vegas HQ, you can not be sure when they will stop attacking Vegas and turn to attack you!

Neuroshima Hex! Vegas was originally released as part of the standalone expansion Neuroshima Hex! Duel, but in this reprint it's a single army pack that expands base game.