Memoir '44: Tigers in the Snow 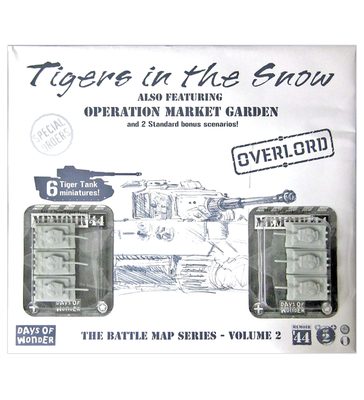 Hot on the heels of their success in Operatsiya Bagration, Soviet forces struck deep towards the Baltic coast, rapidly severing communications between German Army Group North and what little was left of Army Group Center.
By early October 1944, the Soviets were in view of the Baltic Sea, near the port of Memel, definitively cutting off Army Group North from any retreat route through East Prussia.
Despite Guderian's plea for an evacuation by sea and subsequent redeployment in Central Europe where forces were desperately needed to help stabilize an increasingly dicey situation, Hitler stubbornly refused.

Instead, he ordered the 200,000+ German troops to entrench themselves, in the hope of using the Courland Pocket as a springboard for a future offensive.
Little did the Führer realize that what he insisted on calling a bridgehead (the Kurland-Brückenkopf) would only become a bridge to oblivion for his haplessly trapped German divisions; They would go on to resist six major battles before finally surrendering to Marshal Govorov on May 8, 1945.

The majority of the 200,000+ men of Army Group North would be marched into Soviet prison camps to the East, most of them never to return

This Battle Map set also includes 2 Standard scenarios playable on a regular Memoir '44 board and featuring the new Tiger tanks - Villers-Bocage and Wittmann's last stand at St-Aignan-de-Cramesnil.
NOT A STAND ALONE GAME! Requires one copy of Memoir '44 and the Operation Overlord expansion, or two full copies of Memoir '44.
Purists wishing to use figures all of the proper color will also need 2 copies of the Eastern Front for Tigers in the Snow, and 1 copy of the Mediterranean Theater for Operation Market Garden, though these are not required to play the game.
The bonus two Standard scenarios only require one copy of Memoir '44 and the Terrain Pack to play.