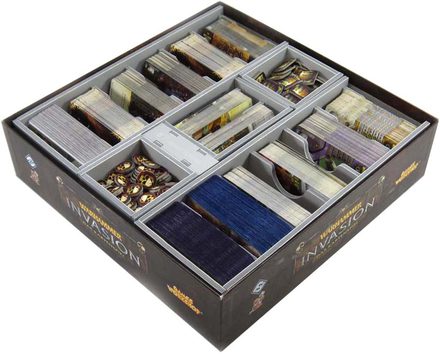 This insert is designed to be compatible with Living Card Game® style games, such as Warhammer Invasion®, Ashes Rise of the Phoenixborn®, Android Netrunner®, Star Wars®, The Lord of the Rings: The Card Game® and many others. The design provides both efficient storage and improved gameplay. The token trays can be utilized during the game, and all trays greatly aid set-up and clear-away times.

The insert is intended for games with a box size of 29.8 x 29.8 x 7 cm (the larger standard for LCG games). There is space for all cards to be sleeved.

Note: the card trays are bottomless and are not intended to be removed from the game box.

This insert can be used in one of two ways - either using both small card trays together with just two token trays or using all four token trays and just one small card tray. The product has sufficient components for both variants.

This product consists of a flat pack of 4 Evacore sheets. The trays require assembly, which is quick and fun, using ordinary PVA glue. Detailed instructions are included in the package.