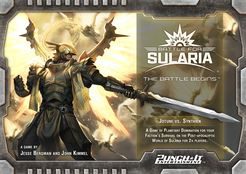 Welcome Battle Commanders! The future of your faction's survival is depending on you! Gain influence and expand your forces to strategically defeat the opposing faction. You win the battle when you reduce your opponent’s health to zero. However, a Battle Commander must be cautious if their opponent is off-initiative. Since Battle for Sularia is a round-based card game, if your opponent is off-initiative, they have the chance to strike back and reduce your health total below theirs and thereby defeating you and winning the game!

With one box, you and your friend can play with the preconstructed 60 card play decks in a head-to-head 2 player game. The two players can then play in our "60/90" constructed format by customizing their play decks with the additional 60 cards provided in the box! If draft play is more your style, one box also supports 2-4 player draft play! An 8 player draft simply requires one additional box. Of course, the game is fully expandable for a variety of casual play modes – one box supports up to 2 players in casual mode, but there is simply no limit on how many players and formats are available with additional boxes.

Unique "60/90" deck construction system. Each card has a construction point value of 1 to 4 points. Each deck must have a minimum of 60 cards and a deck cannot exceed a total construction value of 90 points. This system pushes the envelope on deck construction and maintains value and interests for all cards within the set – not just a few select overpowered options.

Engaging two-resource system which includes influence and sularium. Influence increases once per round, while each player uses their influence to establish sites on their turn to help build their sularium stockpiles. Sularium is used to deploy combatants, which are used to attack your opponent's sites. The two-resource system in turn provides additional strategies for repeatable game play.

Simultaneous combat. The game runs on a round-based system, which allows each player to complete their turn before the round is over.