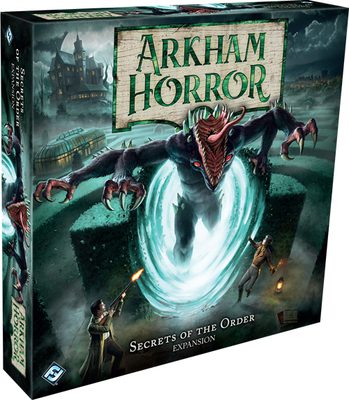 The unquiet spirits of the dead cry out and ghouls stalk the midnight streets of Arkham. Derelict portals yawn open between our existence and the horrific unknown, and even in the storied French Hill neighborhood, the Order of the Silver Twilight plots their path to greater power.

This new expansion brings investigators to the classic neighborhood of French Hill while also sending them beyond our reality into the depths of the terrifying Underworld. Two new double-sided map tiles bring the older regions of Arkham, Massachusetts to life, including the aforementioned French Hill neighborhood, as well as the Underworld itself. Four more investigators join the party, ranging from the steadfast soldier Mark Harrigan to the confident aviatrix Winifred Habbamock.

The investigators’ jobs will not be easy—this expansion brings three entirely new scenarios into the fold, challenging investigators with restless spirits, secret cultists, and the depths of the Underworld itself. With over 130 new encounter and event cards, new assets, monsters, conditions, and a new type of map tile, Secrets of the Order opens a portal to a hoard of content, pulling you into some truly terrifying tales. Secrets of the Order comes packaged with three new scenarios, and with them comes an enormous amount of replayability, bringing you throughout the older areas of Arkham, Massachusetts. Whether you are protecting innocent bystanders from rampaging gugs or stopping the Order of the Silver Twilight from summoning an Ancient One, new threats will keep you on your toes in each scenario.

This time, however, the threats are even harder to pin down than usual. Several monsters in this expansion have the new “shrouded” keyword, cloaking everything from its attributes, abilities, to even its health in mystery. This is especially showcased with the three Haunting Dead monsters featured in the expansion’s first scenario. The true nature of these monsters is not revealed until an investigator engages them or they are exhausted, and, since they have no health value while shrouded, they cannot be defeated until they flip to their non-shrouded side. After all, you can’t fight what you don’t know!

This wouldn’t be a new Arkham Horror expansion without some new investigators. One of these is Agatha Crane, a woman who expertly blends science with the occult. With degrees in Mathematics and Psychology, Agatha has always placed a premium on evidence-based science and logical thought. When she was young, she didn’t pay much attention to superstitions or ghost stories, but mounting evidence in recent years has led Agatha to conclude that there is a kernel of truth to the tales of monsters, spirits, and magic that permeate Arkham’s history. That said, if these things are real, then they must obey consistent rules, just as the physical sciences do; she just needs to find them. And so, as the pioneer of the new study of “parapsychology,” Agatha seeks to bridge the gap between the mystic and the rational, and she will plunge headfirst into the unknown.

While she’s a scientist at heart, Agatha is surprisingly adept at using magic. With above-average lore and solid sanity, Agatha can be certain to cast a spell successfully, and, with her personal ability, she can take advantage of the spell’s horror cost to focus for free and gain a remnant! Agatha can also put her parapsychological expertise to use with the Occult Principle , a unique talent that is one of her starting cards. After taking a risk by delving into the horrors of the occult for an extra clue, Agatha flips this card over to the Scientific Method . By using the ward action to remove the extra doom from her Occult Principle, Agatha could use the Scientific Method to gain even more clues with a free research action, all while stockpiling more remnants for later use.

Clearly, the more Agatha understands the occult and the arcane, the more useful and formidable she becomes. And she is just one of the four new investigators included in Secrets of the Order!

As one of the oldest parts of Arkham, French Hill is home to ancient secrets, potential allies, and mysterious threats. Meanwhile, in the deepest layer of the Dreamlands lies the Underworld; a realm of monsters and madness, where only the very desperate dare to roam. You know that someone is trying to merge these two realms together, but the question remains: will you be able to stop them in time?